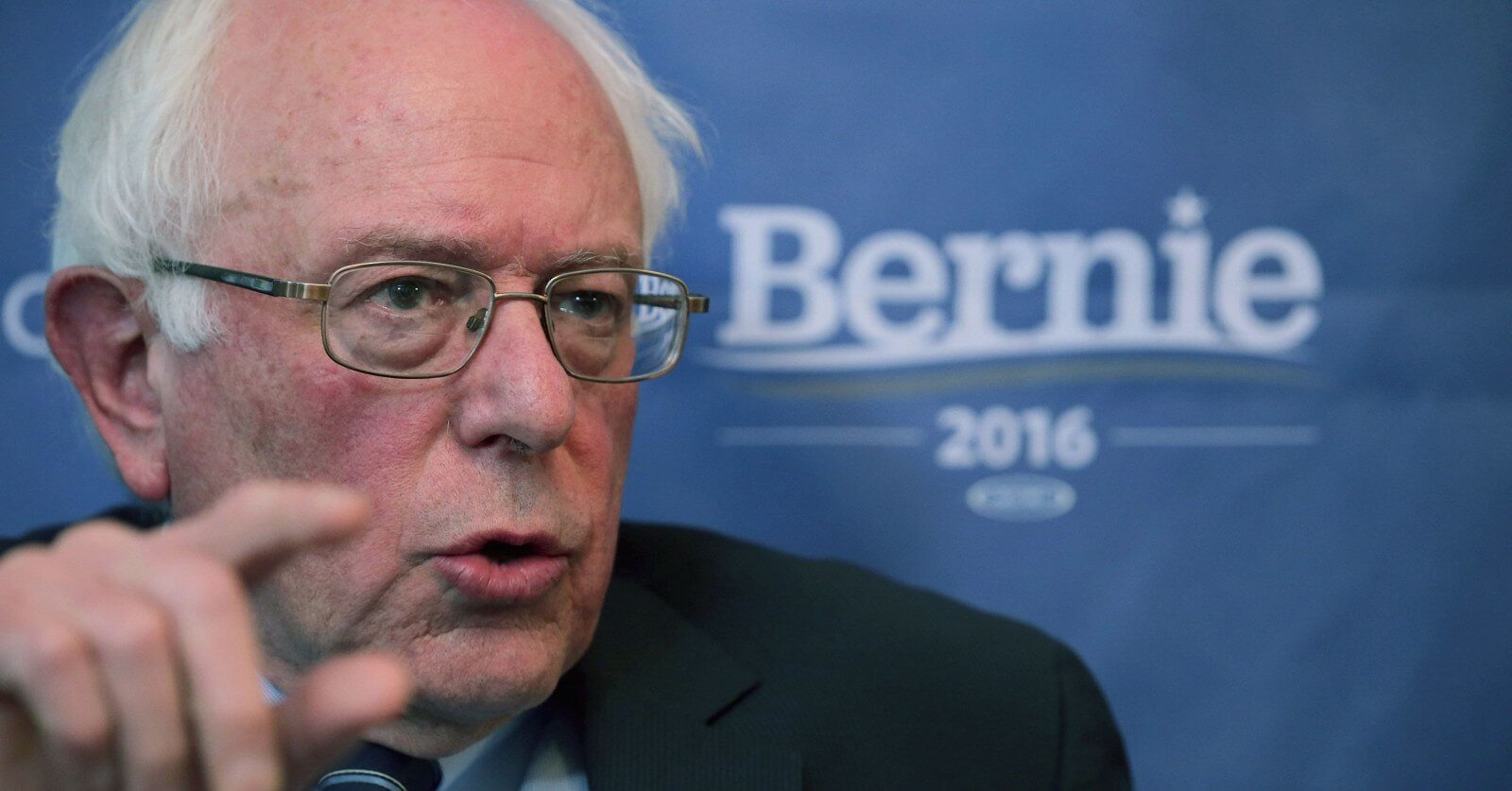 One of Bernie Sanders’ most popular positions is his call to, as his website proclaims, “make college tuition free and debt free.” While the proposal may strike conservatives as both absurd and unlikely, it’s worth paying attention to. For one thing, it may be less unlikely than it appears. Other countries–as Sanders is fond of pointing out–have adopted publicly-funded higher education, and the issue fits the same template that gave us Obamacare: a viscerally appealing reform for an undeniably broken system.

Whether or not we end up having a serious debate over free college, Sanders’ proposal is worth thoughtful consideration because it is the sort of policy we are going to see proposed more and more as the United States debates whether to continue our drift toward a more European system where core social functions are financed and administered by the government.

Sanders wants a new tax on financial trading to allow the federal government to fund 2/3 of the cost of offering tuition-free higher education at public colleges. (The remaining 1/3 of the funding would come from the states, but Sanders doesn’t talk about that part as much. Politifact rated his claim that the program would be paid for by the Wall Street tax mostly false for failing to mention that remaining 33 percent of the required funding.) As Sanders tells it, a relatively modest tax on “rich Wall Street traders” would ensure that no one would ever again be excluded from higher education because their parents could not pay, and no one would have to struggle for decades with crushing student debt. Plus, more educated citizens would be able to contribute more to the American economy, paying back our collective investment in the long run.

It’s an appealing argument, particularly in the context of ballooning, absurd college costs and a student debt crisis that is only getting worse. Like most “government should” arguments, it draws power from what Milton Friedman called the difference between the ideal and the actual. However good a plan may be, working it out in the real world is always messier, with trade-offs and unintended consequences galore. The fallacy of comparing today’s messy reality with an ideal, theoretical alternative leads to everything from job dissatisfaction to adultery. It also makes vague “government should” proposals very persuasive. In a contest between our world of skyrocketing education costs and debt vs. a world in which a minor tax on the rich lets everyone go to college for free, option B wins every time. Before we get too excited, though, it’s important to sketch out what the ideal will look like when it hits the real world. In the case of Sanders’ education plan, things get a lot messier.

One challenge is making the math work. While Sanders’ camp argues that his Wall Street tax would raise $75 billion annually and that amount would be adequate to fund the federal government’s portion of his proposal, that is unlikely. Taxes decrease taxed behavior by making it more expensive, and subsidies increase subsidized behavior by making it less expensive. If you tax financial trading, you’ll get less of it; hence less tax revenue as well. While Sanders’ tax rate sounds low (0.5% or less), it’s a tax on every transaction, so it will add up, driving capital out of the market into other, more lucrative investments. Meanwhile, free college means more college students and therefore increasing costs in the future. Where is that money going to come from?

Even if the program miraculously stayed within budget, its broader economic effects should be concerning. Additional taxes on financial trading will cut into earnings for investors ranging from wealthy speculators to middle-class mutual funds. Whether investors stay in the stock market or seek other opportunities, they will end up with less money in pocket at the end of the year, which means marginally less of the investment and spending that drive our economy. For poor and middle-class families, even small changes in GDP carry painful consequences when it comes time to look for work, pay the mortgage–or save for college expenses (many of which would remain even with free tuition).

While the federal portion of Sanders’ education proposal would theoretically come from his new Wall Street tax, the remaining 1/3 would come from the much smaller budgets of individual states. Participating in the program would mean painful reallocation of money from other priorities, whether roads or law enforcement or social programs or… primary and secondary education. Individual states’ spending decisions would be overridden by a one-size-fits-all federal mandate to fund free college for young adults, many of whom are quite capable of paying for their own schooling.

Unlike the current system of Pell Grants and other need-based assistance, free college is free college for all, meaning both federal and state funds would be flowing to many who had no real need. Of course, even well-off college students wouldn’t mind tens of thousands of dollars worth of free schooling, but we have to remember that every dollar spent for one purpose is a dollar lost from some other purpose that might do more good.

And where would those dollars be flowing? Right into the public higher education system. With free public universities, private schools would starve for students and tuition dollars. We’ve already seen where such a competitive advantage for public schools leads–right to the sort of mediocre, unimaginative, and ideologically intolerant education system that is currently leaving American middle and high schoolers further and further behind their peers in other developed countries.

Without the challenge of competing for students, educators have little incentive for innovation or excellence. It is not a coincidence that American primary and secondary education, where public schools are free, have faltered while our higher education system, where public schools still have to compete for student dollars, has remained among the best in the world. While Sanders talks about making more young Americans competitive in the global economy, his plan would pour more and more of them into a system that would be less and less able to accomplish that goal.

The System Isn’t Working, So Let’s Put Everyone In It

And are we sure that a traditional college education is actually the best route for most students? Even if college was free, it would still be an investment of at least four years to earn a piece of paper that may bring with it little in the way of either genuine learning or practical knowledge. While the logistics are still being worked out, cutting-edge industries like the tech field are increasingly turning to certification programs, apprenticeships, or other alternatives to traditional higher education. Many experts believe we are on the verge of a revolution in higher education that will produce more learning with less investment of both time and money.

Exactly what will it look like? Who knows. That’s why it will be a revolution. But we can be pretty sure it won’t look like the decades-old American college system that Sanders wants to freeze in place with government subsidies and an influx of students who are baited into investing half a decade in a place that isn’t very well suited to meeting the needs of many of today’s students–and will be even less suited to meeting the needs of tomorrow’s.

The Wrong Answer for a Real Problem

Ironically, Sander’s plan is an attempt to deal with the consequences of yesterday’s reform, which was cheap, federally funded student loans. While the loans were supposed to make college more affordable (sound familiar?), they created a spigot for federal funding that allowed schools to inflate costs at an exponential rate. Colleges added administrators, sporting complexes, and other programs while paying little attention to efficiency or frugality. The consequence? Astronomical tuition costs and a student debt burden well north of $1 trillion and growing at nearly $3,000 per second.

Now that this thicket of problems is in place, it will be hard and complicated to clean up. Possible solutions are beyond the scope of this article, though one element might be expanding the need-based Pell Grants which have been cut in recent years. What is clear is that true reforms will take more than simply taxing a few fat cats to make school free for everyone. Whatever his intentions, Sanders’ plan would cripple state budgets and have unpredictable effects on the national economy in order to give “free” tuition to many students who don’t even need it. Even worse, it would pour those students into outmoded public schools, freezing in place a system which everyone agrees isn’t working very well. For the sake of American higher education and the young people who depend upon it, please–don’t let Bernie Sanders fix it.