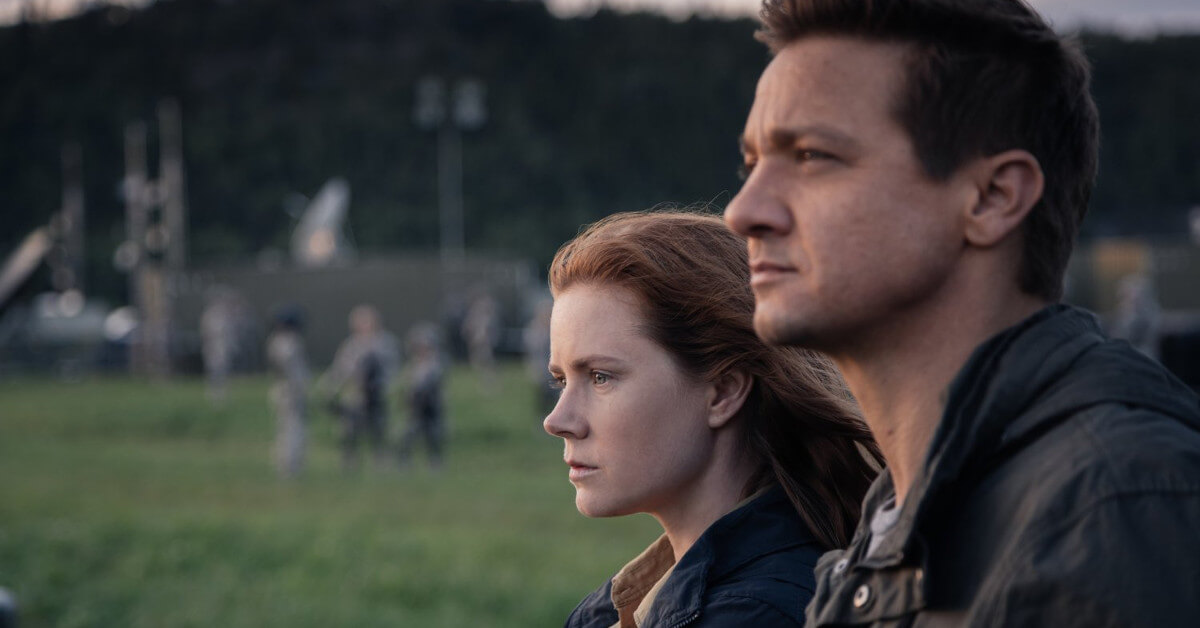 I have heard a lot of good buzz for Arrival, so Leah and I rented it for a date night last week. It wasn’t what I expected, but the movie was well-made and intriguing and has been on my mind since then. What follows is less a review than a meditation on some of the movie’s ideas, but be warned: Spoilers ahead!

Arrival is an alien movie that isn’t really about the aliens. Rather, it’s about linguist Louise Banks and her efforts to communicate with a newly arrived alien spaceship on behalf of the US government. The story begins and ends with an emotional gut-punch: the slow death of Louise’s teenage daughter due to a rare congenital disease. It begins and ends that way because we watch her daughter die in the first five minutes, then learn in the last five minutes that all that suffering is still to come for Louise.

You see, Arrival isn’t just about aliens. It’s also about time. More precisely, it’s about aliens who aren’t bound by time like we are. They see time as just another dimension through which they can move, and immersing herself in their language gives Louise the same ability, though neither she nor we realize it at first. When the viewer finally figures out what is going on, we discover why what had appeared to be flashbacks of her daughter’s life had so disturbed her—because she wasn’t married and didn’t have a daughter yet. The “flashbacks” were actually flashforwards, as her study of the alien language began to free her from the constraints of linear time.

As we realize what is happening, Louise’s statement earlier in the movie that her husband left her after their daughter was born with a fatal illness lends a new and bitter flavor to the romance growing between her and a fellow scientist, Ian. Yet the final moments of the movie show her married to Ian, who asks her if she wants to have a baby. The camera zooms in on her quiet face as she says yes, and the movie is over.

To the degree that the story has a “message,” it is about the beauty of accepting what cannot be altered. And the love which prevents Louise from trying to change the future to erase her pain, since doing so would mean erasing her daughter as well, is indeed a beautiful thing. But I could not help thinking that the virtue which the movie holds up for our admiration is fundamentally a pagan virtue (Stoic, to be specific).

It is a Christian virtue to be content with the present; it is a pagan virtue to be resigned about the future. The pagan Stoics believed in a thoroughly deterministic universe in which everything which happened was predetermined by fate. Human effort could not make any difference, so virtue and whatever happiness was possible lay in accepting with peace and self-control what could not be changed.

The problem faced by the Stoics, and by their modern, more scientific cousins, is that the impersonal mass of the universe seems too heavy for us to shift. Whether it is the Fates or our own biochemistry which fixes us in our deterministic track, there always seems to be something else which is making our choices for us, if we only dig deeply enough. In a universe where everything we experience operates according to immutable laws of causality, how can our own choices be anything but the effect of some prior, uncaring cause?

The only philosophically satisfying explanation for real, meaningful human free will is if Someone greater than us stands above the human race, lifting up the crushing weight of the impersonal universe to create space for men and women—our days a mere breath, a passing shadow, as the psalmist says—to make real choices with lasting consequences. Only the One who freely chose to create the universe itself could implant a droplet of that sovereignty into the creatures created in his image.

(It may seem odd for a Calvinist to be writing a paean to human free will. I do believe in God’s absolute and sovereign control over all things—because the Bible teaches it. But I also believe that human beings make real, meaningful choices—because the Bible teaches that too. I have discussed elsewhere the difficult but not insoluble challenge of fitting these two biblical convictions together, but here I will simply point out that believing in both means believing in both; and for the moment my interest is in our God-given ability to choose.)

From the forbidden tree in the Garden to the prophets’ cries for repentance to the apostles’ call to “believe in the Lord Jesus,” the Bible tells us that humans can choose, and must choose. Joshua called Israel to “choose this day whom you will serve” (Josh 24:15) and Jesus counsels us to hear his words and do them, like the wise man who built his house upon a rock (Matt 7:24-27). However God’s saving, resurrecting grace operates on a supernatural level, on the human level our experience is one of choosing, and not just once at our conversion, but again and again, daily, as we make the choice to love our Lord and to love our neighbor, or not.

That is why a Stoic lassitude about the future cannot be a Christian virtue, because the Christian believes the only thing which cannot be changed is what has already happened. Whatever enemies are arrayed against us, whatever habits and failures and sins lie behind us, whatever personality we have and whatever experiences we’ve gone through, our future is not determined by our past—or by anything else in this world.

But perhaps the thought of your responsibility for your own future does not fill you with joy. After all, the ability to choose, by itself, is not an encouraging thing. For the atheist thinker Jean Paul Sartre, who believed in absolute human free will, the future became an anguishing void filled with unanswerable responsibility. Who can comfortably shoulder accountability for every decision in a human life? But God does not lift the weight of a deterministic universe off our shoulders only to replace it with the weight of a million unaided decisions. As we face the future, we do so with the Spirit in us, the Son interceding for us, and the Father working out his purposes in and through us. For the Christian, our own free will gives us joyous opportunity and bracing responsibility, while our Father’s gracious sovereignty offers comfort, rest, and assurance. Either determinism or freedom, by themselves, cannot help making the future dreadful. Only true religion can make it hopeful.