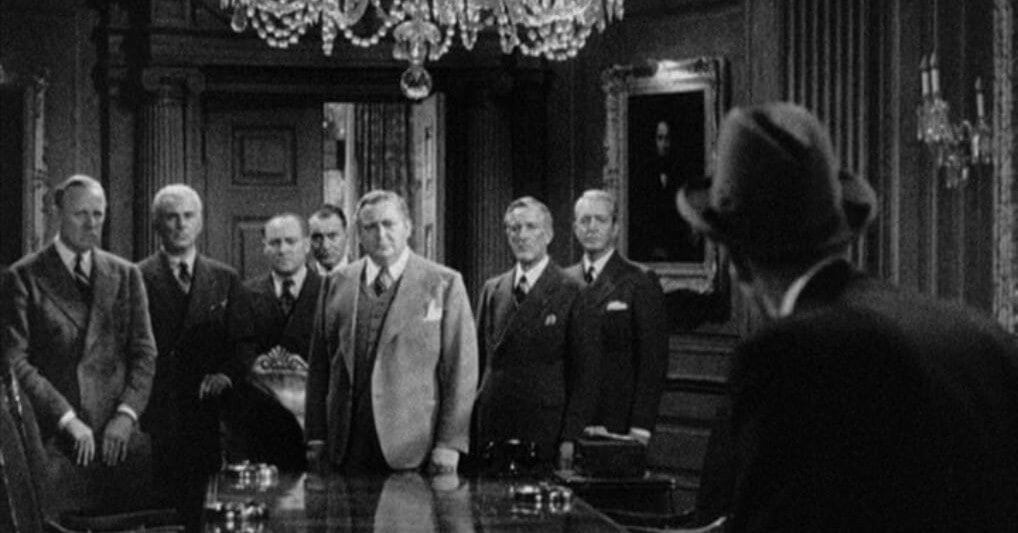 In the classic movie You Can’t Take It With You, the climatic scene is a confrontation between the brutally capitalistic Anthony P. Kirby and his competitor and one-time friend, Ramsey, whose business Kirby has just destroyed. Kirby is on top of the world, about to sign a hard-won deal which will make him fantastically rich, when a broken Ramsey bursts into his office with a prophetic warning.

I have suddenly realized that I haven’t lost a thing; that I never gained one moment’s happiness out of it. And I warn you, Anthony, neither will you. In spite of your victories, you can’t shut out every decent impulse and survive. You’re top-heavy with power right now, Anthony, but you’re going to crack under it. You’re bound to crack under it… You’ll scream for help and suddenly find yourself alone in the world. You’ll wriggle on the hook and find that nobody gives a hang. I know—because that’s what happened to me. And it’ll happen to you. That’s what happens to all men like us, Anthony; it’s coming to us.

Kirby listens quietly to the hoarse warning and watches impassively as his old friend collapses on the boardroom table before being helped out of the room. Moments later, in the sort of instant reinforcement which only happens in the movies, the businessman’s only son, Tony Jr., comes to tell him he’s leaving, unwilling to follow in his father’s footsteps. He departs, and the great Anthony P. Kirby sighs, gathers himself to his feet, and walks into the elevator that will take him up to the top floor to sign the deal.

As the elevator doors open, Kirby looks down a long row of applauding executives, ready to sign the papers that will mark the pinnacle of his career, pauses a dramatic moment, and snaps instructions to the elevator attendant to close the doors again and take him away from it all.

Because movies are fiction.

In real life, Anthony P. Kirby goes into that boardroom and signs that deal, because he is who he is and the tiger cannot change his stripes.

I am sure there is something harder than overcoming yourself, but I do not know what it is. Tally up how much of the suffering around you is caused by active malice and how much is caused by people on autopilot, and it won’t even be close. Everyone around us may see what needs to be done or said or changed, but the ruts of a thousand yesterdays will carry us smoothly through even the most glaring warning signs. How much pain do we cause to ourselves and others as a mere matter of habit? Through what we do or don’t do simply because that is what we have always done or not done?

It is relatively easy for us to jettison our atypical sins. They come out easily because they were never really part of us. It’s the habitual sins which are buried too deep for us to see, let alone eradicate. The workaholic doesn’t mind apologizing for snapping at his wife, but it would never occur to him to rearrange the furniture of his life to be able to spend more time with her. The impatient wife will gladly repent of telling a white lie, but she would literally never think of disciplining herself to be more understanding of her husband. Habit turns our worst sins invisible, so we end up killing those around us, little bit by little bit, without even noticing. There is good reason for the Psalmist to plead, “Who can discern his errors? Acquit me of hidden faults” (Psalm 19:12).

One of the most practical, life-changing prayers we can pray is for God to show us the sins which are so deeply a part of our personality that we don’t even realize they are there. Be warned: He will, and it won’t be pretty. But our Father is not in the business of leaving us alone with our sins; he will give us strength to fight and win, small victory by small victory, as we pray and strive. And in the process, we will become more like Christ and better and safer friends to those we love.

I said there is nothing harder than overcoming yourself, but I didn’t say it is impossible, because it isn’t. Some Anthony P. Kirbys do slam the elevator doors and walk away. The past is heavy, but it has one great weakness—it is a dead weight. It cannot hold you, except through inertia. Living, changing choices are only possible in the present, and each day brings a fresh choice and a fresh chance. If you are in Christ Jesus, armed with his strength and his Spirit, you have nothing to fear; not even yourself.