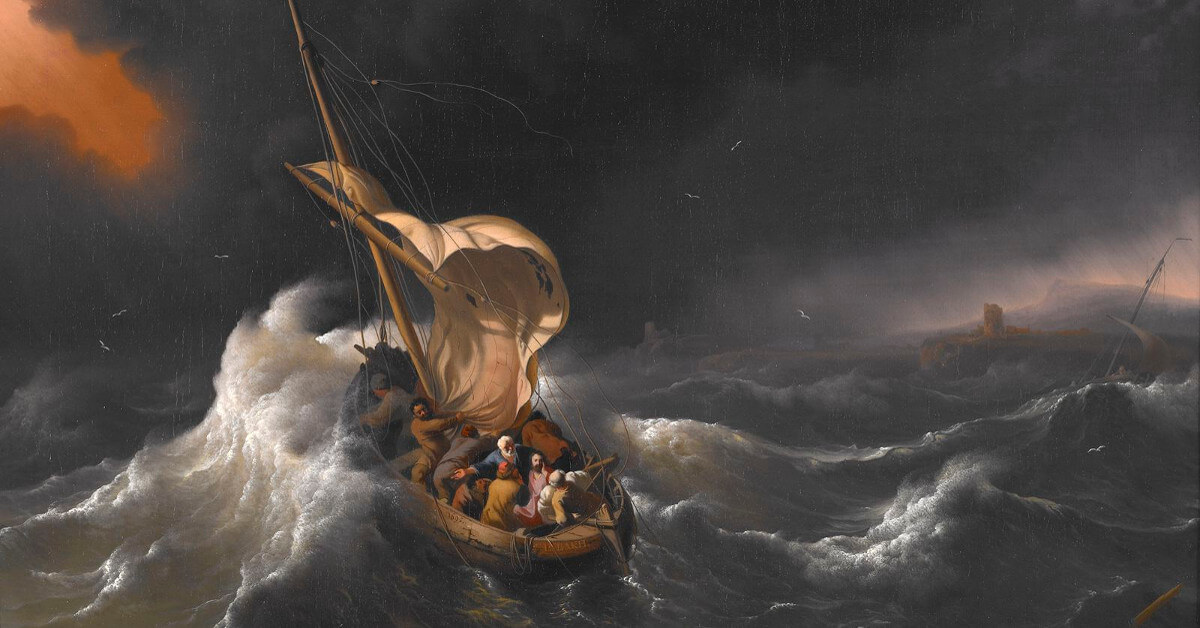 One of my favorite Bible stories is the account of Peter walking on the water in Matthew 14. Caught in a dangerous storm on the Sea of Galilee, the disciples were surprised and frightened by the sudden appearance of their Master, walking through the storm. Peter, impetuous as always, cried out to Jesus, “Lord, if it is you, command me to come to you on the water,” and Christ replied simply, “Come.” So Peter came, but partway there his fear of the waves overcame his faith in the Lord and he began to sink, until he cried out for help and Jesus snatched him to safety.

The story has much to teach us about the nature of faith—about the danger of focusing on our circumstances rather than our God, and about the hope that comes from having a God who acts to help us even when our meager faith is spent. But there is also a danger in Peter’s story if we take it too specifically as a guide for what faith should look like. The danger lies in a detail which is vivid and memorable—the stuff of ten thousand Sunday School flannelgraphs—but is ultimately of secondary importance: That faith, in this particular situation, involved getting out of the boat.

How many of you have been exhorted by a friend or pastor to “get out of your boat” like Peter? To take a daring and dramatic risk, trusting God to do what you cannot? Perhaps you have looked in vain for such an opportunity. Or perhaps you have decided you just aren’t a “getting out of the boat” Christian and your place is back with everyone else, cheering on those who do have the boldness to step out in faith. Unfortunately, neither of these common responses comes from a true picture of what everyday faith usually looks like.

The problem with limiting faith to dramatic “get out of your boat” moments is illustrated by another story that took place in a storm on the Sea of Galilee. Mark 4 describes the scene,

On that day, when evening had come, [Jesus] said to them, “Let us go across to the other side.” And leaving the crowd, they took him with them in the boat, just as he was. And other boats were with him. And a great windstorm arose, and the waves were breaking into the boat, so that the boat was already filling. But he was in the stern, asleep on the cushion. And they woke him and said to him, “Teacher, do you not care that we are perishing?” And he awoke and rebuked the wind and said to the sea, “Peace! Be still!” And the wind ceased, and there was a great calm. He said to them, “Why are you so afraid? Have you still no faith?” And they were filled with great fear and said to one another, “Who then is this, that even the wind and the sea obey him?”

None of the disciples stepped out of the boat in this story. All they did was answer when Jesus called, follow where he led, and climb into the boat with him when that was the next thing to do. They did not leap into the waves, but the waves came to them—and with the waves, the gift of a chance to exercise the faith which is “counted as righteousness” (Rom 4:22-24) and in which our Father delights (Heb 11:5-6).

Of course, like Peter, the disciples’ faith failed at the crucial moment; and, like Peter, Jesus saved them anyway. What a remarkable question his disciples asked: “Teacher, do you not care that we are perishing?” They were indeed perishing, even more than they realized. They were perishing on a ship that was sinking beneath them, but they were also perishing in a world that was dying around them. But the answer to “Do you not care?” was right there with them, in the person of God, in a human body on a sinking boat in a dying world. A God who put himself at the mercy of the waves so we would not be all alone as the water rose.

Mark 4 can teach us a few important things about faith. First, it dispels the idea that God is waiting on us. Sometimes you may jump out of the boat, but very often the waves will find you. Faith is not something we jumpstart if we are feeling adventurous. It is a natural and inevitable requirement of following Jesus.

Secondly, the story helps us to broaden our understanding of faith beyond impetuous Peter. Faith can also mean staying where our Lord put us, looking to him as the waves roll and the deck sinks beneath our feet, even when it seems like he isn’t paying attention and we want to cry, “Teacher, do you not care that we are perishing!” He cares. That is why he is in the boat with you. And notice that Jesus only rebuked the disciples for being afraid—for not trusting in him. If the disciples had merely woken Jesus to ask for his help, they would have only been following the admonition of Psalm 50, “Call upon me in the day of trouble; I will deliver you, and you shall glorify me.” Faith can and should include crying out to God to calm whatever waves are washing over us, but faith also remembers that the depths beneath us are no match for the love of God with us.

The Bible makes it clear that faith is the distinguishing mark of a Christian. We must not allow theological misunderstanding to rob us of the beauty of walking with God in faith, trusting him amidst the waves. If you are one of God’s children, trials and challenges will come. And when they do, look in faith to the One who cares, who came into our storm, and who will never leave us nor forsake us.

Header image Christ in the Storm on the Sea of Galilee, Ludolf Bakhuizen, cropped

2 thoughts on “Faith Amid the Waves”