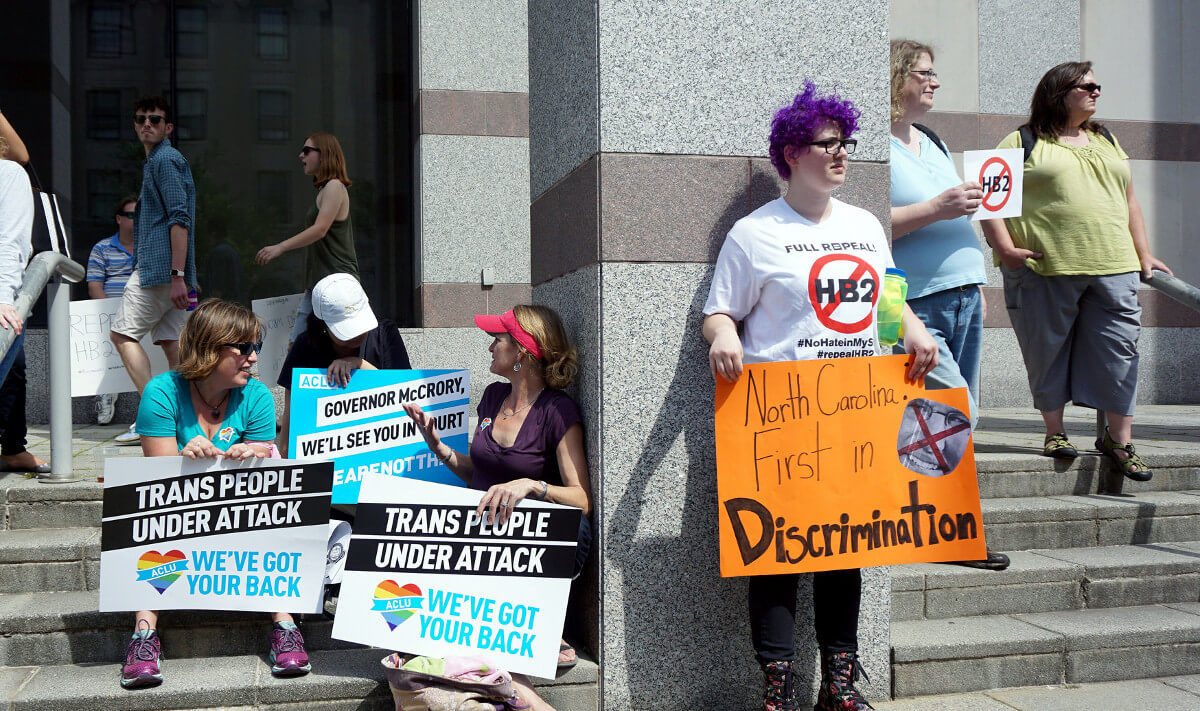 It’s been a few months since HB2 dominated the news cycle and sent “bathroom” trending on social media, but the concerns of the pro-HB2 side continue to be widely misunderstood. I have lost count of how many times I have seen serious, earnest explanations that transgender men (i.e. those who identify as women) are not interested in raping women in bathrooms, as if that prospect was the motivation behind the law. Since the Department of Justice just filed for an injunction that would suspend HB2 as part of their ongoing litigation against the North Carolina law, this seems like a good time to clarify what is at stake.

To begin with, we should be clear about what is not behind the law. I don’t know anyone who is seriously concerned about men who are actually transgender assaulting women in bathrooms. A man who genuinely identifies as a woman is not a likely rapist. The oft-repeated reassurance that transgenders will not be assaulting “other” women en masse is obvious and irrelevant.

Rather, the threat to women comes from the fact that opening female bathrooms to transgender men is premised on the idea that there is no physical way to truly tell a man from a woman because gender identity is entirely subjective. North Carolina law already allowed people who were born male and legally transitioned female to use female bathrooms, and it will continue to do so after HB2. The question is whether men who appear in every way to be male should be allowed in female bathrooms and changing rooms on their mere say-so that they identify as women. Surely it does not take a profound knowledge of male psychology to conclude that such permission makes voyeurism and assault far more likely? (Bathrooms are already a common spot for sexual assaults in public schools. Teachers are often blamed afterward for not noticing a boy heading into the girls’ bathroom, but in our newly enlightened society they will be blamed more if they do take note of such a mismatch.)

Beyond the threat of assault, there is the prospect which the Charlotte Observer brightly summarized in an editorial, “Yes, the thought of male genitalia in girls’ locker rooms – and vice versa – might be distressing to some.” The solution, according to the Observer, was for girls to “overcome” the resulting “discomfort.” Only in a culture in which Darwinism and pornography have thoroughly devalued the human body could such a casual dismissal be possible.

The point is not that boys and girls must be entirely ignorant of each other’s basic anatomy, nor that an accidental glimpse will scar a child forever. No one is saying we need to ban anatomy textbooks. That being said, might there not still be value in the idea that an uncovered human body ought to be treated with somewhat greater respect than a slab of beef at the deli counter? The Bible often warns against “uncovering the nakedness” of anyone but our spouse, and thousands of years of history demonstrate the instinctiveness with which we erect barriers between female bodies and the male gaze, and vice versa. Popular culture, of course, reinterprets such respect as evidence of shame (perhaps because popular culture is much more familiar with the latter), but anyone who has ever slid behind a closed door with a lover knows the absurdity of assuming that privacy is evidence of shame.

Even if not a single woman is ever assaulted as a result of allowing men into female changing rooms, both sexes will suffer from the devaluation of their bodies that such unprotected intermixing represents. The Obama Administration’s message to both men and women is that desiring privacy for their unclothed bodies is not only unreasonable, but actually intolerant. It is odd that a society which is usually alert for sexual exploitation would find such a demand so unobjectionable.

Moving from personal privacy to broader principles, transgender policies such as the Charlotte ordinance which HB2 overturned are also troubling because of their assault on religious liberty and property rights. Like laws passed in New York City and Washington, DC which impose large fines if employers and landlords do not use a person’s “preferred pronouns” (such as “xe” or “xir,” which rebel against the gender binary), Charlotte-style ordinances force private citizens and business owners to effectively endorse behavior they may believe is immoral. Is it really necessary to pass laws forcing citizens to embrace behavior which essentially everyone in the country agreed was wrong until about five minutes ago? Even from the standpoint of civic prudence alone, it seems like we ought to let moral debates reach something closer to a cultural resolution before codifying one side into law.

A final objection to laws like the Charlotte ordinance is that they legitimize the idea of transgenderism. Both the Bible and our own experience proclaim that there are only two fixed sexes, and undermining that idea is not without consequences in the moral realm and beyond. Fundamentalist Christian teaching is often blamed for the astronomically high rates of transgender suicide, but it is worth noting that Christians have been saying the same thing about sexual ethics for two thousand years. What has changed is the new drumbeat to reject the gender binary and tell young adults they should find their own sexuality however they can. Is it surprising that being told a core part of their identity is fundamentally uncertain and unstable is psychologically unhealthy for many young adults? Whatever proponents may say, adding the imprimatur of the law to the message of confusion can only make things worse.

The law should always protect transgender citizens, like all citizens. Anyone who wants less than equal legal rights and protections for people who identify as transgender is speaking from bigotry, not biblical teaching. (Legal protection and moral approval are not the same thing.) But welcoming a visibly male transgender into the female restroom isn’t about equal rights, it’s about carving out new “rights,” and at great cost. We should welcome ideas for how the law can offer real, meaningful protection for transgender people while also protecting women, valuing privacy, respecting religious liberty, and avoiding harmful messages about gender identity, but it is not unreasonable to ask those on the other side to recognize that our concerns are motivated by more than bigotry and misinformation.

Header photo by Nathania Johnson under CC BY 2.0, cropped