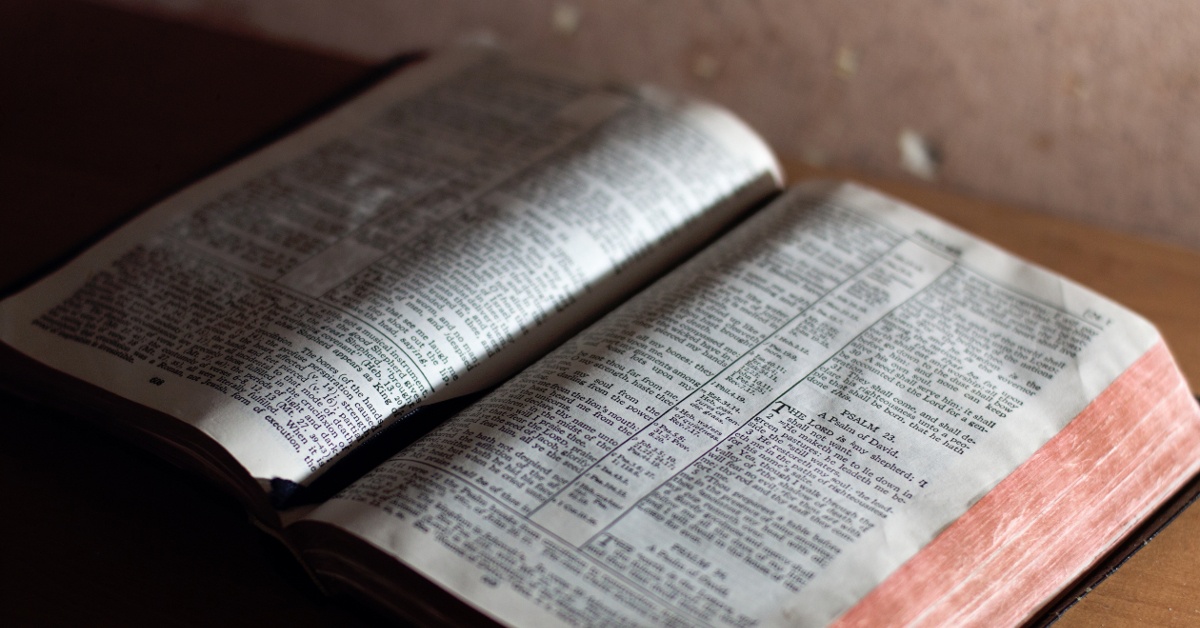 The people who walked in darkness
have seen a great light;
those who dwelt in a land of deep darkness,
on them has light shone.

So opens one of the most loved and well-known passages of Old Testament prophecy, as Isaiah foretells the birth of the one whose name will be called Wonderful Counselor, Mighty God, Everlasting Father, Prince of Peace. The messianic prophecy fills the first half of Isaiah 9, but then the reader suddenly finds himself in the middle of a harsh denunciation of the proud and unrepentant Israelites, warning of coming punishment in the form of Assyrian invasion. And then the chapter is over.

Flip over to the next chapter, and we find another, similar denunciation of Israel, once again prophesying Assyrian attack. Then the chapter turns into a denunciation of Assyria herself, warning this “axe” of God’s judgment not to think herself above “him who hews with it.” And with that, Isaiah 10 is complete as well.

If one is reading Isaiah chapter by chapter, it’s hard in this section to avoid a sense of fragmentary thoughts strung haphazardly together. Yet, if we were to simply erase the chapter division, suddenly Isaiah 9-10 reveals a fairly straightforward structure. There is the beautiful prophecy of the future Messiah, then a shift back to the present with a warning of judgment against arrogant Israel, which then flows naturally into a warning for Assyria as well.

In a world where ideologies are always slippery-sloping away to their worst extremes, it is striking how, if we look at the history of the Church, this “gravity” seems to be constantly at work. It pulled the martial impulse of the Crusades back to earth, so today no part of the Church seeks to spread our faith by the sword. It checked the burgeoning ecclesiastical authority of Medieval Catholicism by restoring the solas of the Reformation. Today, it keeps Calvinists from losing human responsibility and Arminians from losing divine sovereignty.

Commenting on the process of inspiration by which the Bible came together, C.S. Lewis writes in Reflections on the Psalms,

To a human mind this working-up (in a sense imperfectly), this sublimation (incomplete) of human material, seems, no doubt, an untidy and leaky vehicle. We might have expected, we may think we should have preferred, an unrefracted light giving us ultimate truth in systematic form–something we could have tabulated and memorised and relied on like the multiplication table…

We may observe that the teaching of Our Lord Himself, in which there is no imperfection, is not given to us in that cut-and-dried, food-proof, systematic fashion we might have expected or desired. He wrote no book. We have only reported sayings, most of them uttered in answer to questions, shaped in some degree by their context. And when we have collected them all we cannot reduce them to a system. He preaches but He does not lecture. He uses paradox, proverb, exaggeration, parable, irony; even (I mean no irreverence) the “wisecrack”. He utters maxims which, like popular proverbs, if rigorously taken, may seem to contradict one another. His teaching therefore cannot be grasped by the intellect alone, cannot be “got up” as if it were a “subject.” If we try to do that with it, we shall find Him the elusive of teachers. He hardly ever gave a straight answer to a straight question. He will not be, in the way we want, “pinned down”. The attempt is (again, I mean no irreverence) like trying to bottle a sunbeam…

Since this is what God has done, this, we must conclude, was best. It may be that what we should have liked would have been fatal to us if granted. It may be indispensable that Our Lord’s teaching, by that elusiveness (to our systematising intellect) should demand a response from the whole man, should make it so clear that there is no question of learning a subject but of steeping ourselves in a Personality, acquiring a new outlook and temper, breathing a new atmosphere, suffering Him, in His own way, to rebuild in us the defaced image of Himself.

Accepting as a premise this view of the “intentional elusiveness” of much scriptural teaching, it is worth considering how it affects the Christian walk, and in particular our relationships within the Church. As is often the case, we seem to have a tendency to slip away into one of two opposing errors. On the one hand, a right and praiseworthy desire to find out the hidden things of God, to learn His ways, discover His truth, and provide guidance for His flock, leads us to create systems out of the unsystematized, striving as best we can to reflect the Truth in our doctrine. And thanks be to God for those teachers who “feed the sheep” in this way. The danger comes, however, when we easily and unconsciously draw the authority of the Word up into the human constructs which it nourishes; when we forget (in practice, if not in theory) that disagreeing with us is not the same as disagreeing with God.

And so we fight to the death over questions of doctrine upon which reasonable people may reasonably disagree. Is there a difference between baptism by immersion, baptism by pouring, and baptism by sprinkling? Yes. Is it possible that one method is preferable to another? Certainly; in fact, I would make that argument. Can I prove it from Scripture, beyond reasonable disagreement? No. And neither can you or any other Christian. But this now brings us to our first error’s opposite.

Having seen the divisiveness and sin that have followed what one imagines to have been roughly one thousand, nine hundred and seventy-odd years of still-unresolved doctrinal disputes, it is tempting to give up any attempt at systematization or orthodoxy as hopeless and even harmful. If Scripture intentionally does not provide the objective black-and-white schema we would need in order to formulate final answers for so many theological concerns, why even attempt an answer to insoluble questions?

The first and most obvious answer to this objection is found in Christ’s words to Peter immediately before His ascension: “Tend My sheep.” Why is it important to search out (begging divine assistance for our own flickering reason) the principles and truths concealed within Scripture’s intentional elusiveness? “Tend My sheep.”

Returning to the question of baptism as an example, if there is in fact a form of baptism which is more in keeping with the purpose and significance of the act, then it follows that the Church benefits and God is glorified when his people conform more nearly to His ultimate design. If there are ways of worshiping, praying, organizing a church, caring for the poor, engaging the world, or structuring the family which better conform to God’s nature and will, what a poor shepherd he would be who didn’t attempt, to the best of his ability and relying on the guidance of the Holy Spirit, to discover those truths in the light of Scripture.

Jesus Himself did not condemn the master-systematizers of His day, the Pharisees, for attempting to extrapolate rules of behavior from the Bible. Instead, He criticized them for failing to reach the right conclusions, and He offered a better understanding of the principles to be drawn from Old Testament teachings (e.g. Matthew 12:1-7, 12:10-13, 19:4-9, 22:29-32). The Pharisees’ error lay not in studying the patterns of revelation in an attempt to sketch the truth behind, but in becoming so caught up in their own rough sketches that their eyes strayed from the truth they were attempting to approximate.

But the Pharisees return us full circle to be reminded of the danger of our first error, for what Christian has not at one time or another been reminded of his close spiritual kinship to that group of Hebrew theologians whose name has become a shorthand for blinkered legalism? History and our own experience show how quickly we conflate our rules with His, demanding that our brothers bow down and worship before the images we have constructed upon His altar. If love of God and love of His people demand that we search out the elusive truths within His revelation, how can we best avoid the attendant dangers?

The first step, of course, is to beg Him for humility. To pray that our motivation would always and only be love, for the truth we pursue and for the fellow-searchers with whom we seek it. To cultivate an awareness of the distinction between His truth and our extrapolations upon the basis of His truth. To remember that even the most indubitable premise cannot guarantee the truth of a conclusion on the other end of a chain of human reasoning. And to remember that those who doubt our doctrine but love our God are guilty of, at worst, mere misunderstanding, and may only be guilty of arriving first at a truth which we have yet to see.

Beyond this point, however, it is worth returning to Lewis’ final paragraph above, in which he guesses at the reason why we might have received the strange gift of so many dim and elusive truths, “that Our Lord’s teaching, by that elusiveness (to our systematising intellect) should demand a response from the whole man, should make it so clear that there is no question of learning a subject but of steeping ourselves in a Personality, acquiring a new outlook and temper, breathing a new atmosphere, suffering Him, in His own way, to rebuild in us the defaced image of Himself.”

How are we to achieve the right balance between a love of the truth on the one hand and a humble recognition of our own fallibility on the other? How are we to learn, to instruct, and to avoid error as much as is possible for imperfect human creatures? By so “steeping” ourselves in the Word that our very being is, both consciously and unconsciously, shaped into conformity with the One Who we begin to know as we know ourselves. We must absorb, and absorption is a gradual process. To see is not necessarily to know: Many skilled artists have studied and beautifully reproduced Raphael’s paintings, but only his greatest pupil was able to complete his Transfiguration so that one cannot tell where Raphael’s work ended and Giulio Romano’s began.

For of course the ultimate goal is not merely to know the truth, but to know the Truth. If much of Christian doctrine is given to us as a puzzle in this life, we might find a hint of explanation in watching a child’s total absorption in putting the jigsaw pieces together and watching a picture emerge. We may have been given a puzzle, but it is a puzzle the ultimate purpose of which is to show us the nature of the puzzle-maker, and which, like a sort of reverse mirror, impresses His likeness upon us the longer we gaze into it.