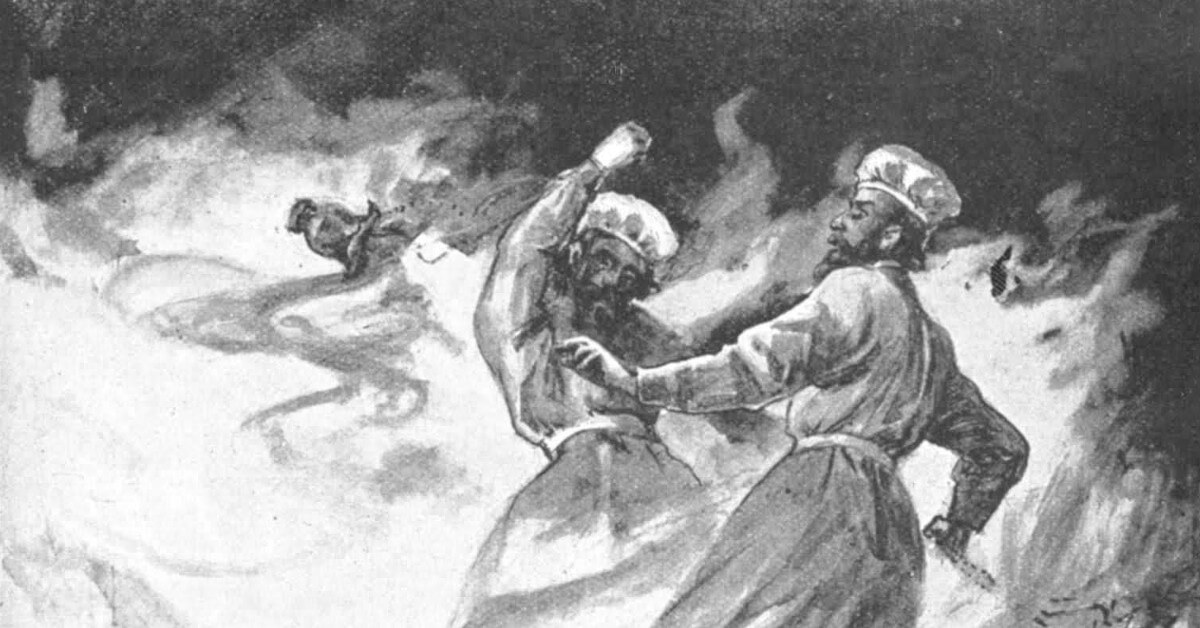 In the latter pages of Exodus and the first chapters of Leviticus, God gives the Ten Commandments, appears to Moses in such glory that his face shines, commissions the construction of the tabernacle and then appears in a cloud of glory within it, institutes the offerings by which Israel will worship him, and establishes the Aaronic priesthood to mediate between himself and the people.

Then two of Aaron’s sons offer “strange fire” before the Lord and are consumed in a fiery judgment.

Leviticus 10 comes as a shocking jolt to us today, coming as it does on the heels of God’s covenant promises and establishment of the institutions which would allow his people to dwell with him. We see the law, the tabernacle, the sacrifices and the priesthood—and then sudden, fiery death. Imagine how much more appalling it would have been to the people of Israel themselves, as they were jarringly reminded that it was not safe to take their God lightly.

It would be comforting to write off the deaths of Nadab and Abihu as a bizarre aberration, but they actually mark the beginning of a repeating pattern in the Scriptures’ account of God’s dealings with his people. Each time a significant new era of redemptive history opens, the Bible pauses to record a sobering story of someone who paid the ultimate price for forgetting the fear of God which Proverbs tells us is the beginning of wisdom.

The book of Joshua describes a new Israelite generation emerging from her wilderness wandering to win a miraculous victory at Jericho as the first step in the conquest of the Promised Land. And then Joshua 7 tells the story of Achan, who ignored God’s ban on plundering the wealth of Jericho. So, at God’s command, “all Israel stoned him with stones.”

In II Samuel, God’s chosen king, David, has finally taken the throne, first of Judah and then of a united Israel. He has won a great victory over the Philistines and chapter 6 describes the triumphant king and his celebrating people joyfully going to bring the ark of the covenant home to Jerusalem. But as the ark is on the road, the cart bearing it lurches and threatens to topple and Uzzah thoughtlessly reaches out to steady the holy box which no human hand is allowed to touch. “And the anger of the Lord was kindled against Uzzah, and God struck him down there because of his error, and he died there beside the ark of God.”

These warning stories do not end with the Old Testament. In the beginning of Acts, Jesus has just ascended into heaven, having commissioned his disciples to build his church. He has sent his Holy Spirit at Pentecost and saved thousands of new Christians who are rejoicing in worship and fellowship throughout Jerusalem. And then Acts 5 tells of Ananias and Sapphira, who lied about their offering to God. First Ananias and then Sapphira persist in their boldfaced deception when Peter gives them the opportunity to change their story, and first Ananias and then Sapphira are struck dead by God. “And great fear came upon the whole church and upon all who heard of these things.”

When reading your Bible, it is usually safe to assume that coincidental similarities between stories are not actually coincidences. As the author of history itself as well as the Bible, God is able to both ordain events and choose which events are recorded in Scripture in order to help us see what he wants us to see. Repetition and parallelism between stories is one of his favorite methods to highlight an important truth. When we see a dramatic scene mirrored four times, the question is not whether God is trying to teach us something, but what he is trying to teach.

To understand these four stories, a good place to begin is the verse in Proverbs which I already referenced: “The fear of the Lord is the beginning of wisdom” (Prov 9:10). Why would the fear of the Lord be the beginning of wisdom? Because finitude and unholiness are inevitably endangered by a holy God. God cannot and will not simply ignore sin, for doing so would require him to cease being holy. (And before we think perhaps that would be okay, pause a moment to seriously consider the prospect of being trapped in a universe with a deity who could not be counted on to be unchangingly good, and from whom death itself would be no escape. We should be very, very thankful that our God will never stop being righteous.)

Complaining that God’s holiness is dangerous to us is like complaining that the sun is hot; it’s simply a matter of what we are and what he is. Thanks be to God that he was willing to become a man and die to give us a way to safely come into his presence where none had existed before. But the atonement does not make God less holy; rather, Jesus takes away our sin and clothes us with his righteousness so that holiness no longer has any quarrel with us.

Because Christ’s sacrifice allows us to safely come into God’s presence—and even to call him Father—it is easy to become complacent and forget that we are still dealing with the God who warned Moses from the burning bush to take off his sandals because he stood on holy ground. Ananias and Sapphira could tell us that the God of the New Testament is still to be feared. That is why Paul had to warn the Corinthians, who had been taking the Lord’s Supper carelessly and selfishly, “Let a person examine himself, then, and so eat of the bread and drink of the cup. For anyone who eats and drinks without discerning the body eats and drinks judgment on himself. That is why many of you are weak and ill, and some have died” (I Cor 11:28-30).

There is a lesson here for us today. C.S. Lewis warned that one danger of the egalitarian, leveling spirit of democracy is that we forget what it means to honor one who is rightly higher than ourselves. Other generations have at times overemphasized the holy justice and might of God rather than his love, but our temptation is the opposite: to delight in speaking of loving our loving God, but to carelessly forget the holy and awesome reality of the God we love. Let us remember the fear of God which is the beginning of wisdom, and in its light appreciate all the more the perfect love which casts out fear.