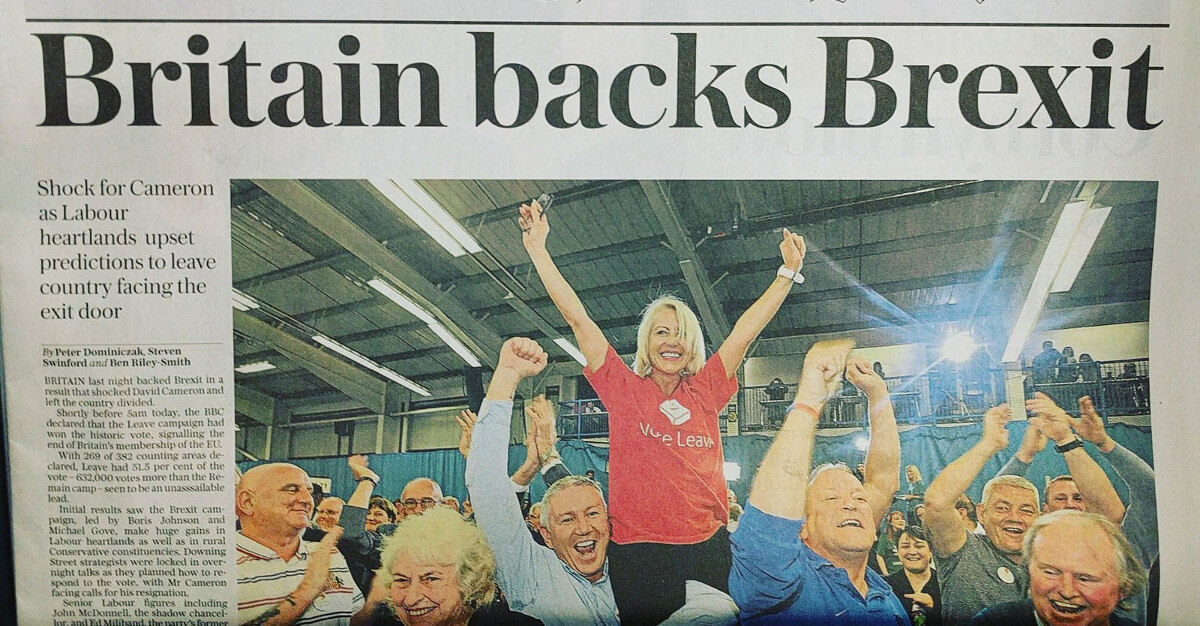 The UK’s “Brexit” vote to leave the European Union has certainly generated much rending of garments among media and political figures on both sides of the Atlantic. I am still unclear how some breathless reporting on Google search trends plus interviews with a few clueless “Leave” supporters proved that all 17.4 million votes to leave the EU were cast by idiots, but I suppose that sort of incisive commentary is why we have media professionals.

I have little to say about the merits of Brexit itself. It will cause some short-term economic pain to Britain and to the global economy, but I am very sympathetic to the desire of the British not to be governed by unaccountable technocrats in Brussels (who celebrated Brexit with sweeping new regulations on electric kettles and toasters across the continent). For the moment, though, I am less interested in the merits of Brexit itself than in why the EU is seen as so essential by so many. Of course, there are plenty of reasons to support the EU, some of them quite sound, but much of the angst over Brexit seems to be driven by a sentimental attachment to the idea that the EU was a step in the direction of wiser, more dispassionate European governance. As such, it is part of a larger tendency, particularly common on the left, to want to solve social problems by putting Better People in charge of them.

“Better” invariably means membership in the intellectual class, with the education, assumptions, and values which go along with it. In the case of the EU, governance by officials who share the elites’ cosmopolitan internationalism (or anti-nationalism?) is supposed to avoid the conflict which has characterized most of the continent’s history, but this same instinct for putting Better People in charge plays out in a million ways in modern politics. In America, it has resulted in everything from the nationalization of health insurance to nanny-state oversight of parenting.

The premise of Obamacare is that health insurance companies are greedy and dishonest and customers are uninformed about their own best interests, so the federal government needs to step in and set everyone straight. Nanny-state laws which criminalize leaving a child for five minutes in a parked car on a mild day or allowing children to play unsupervised are premised on the idea that many parents are careless about their children’s wellbeing, so social workers need to be empowered to step into the gap.

And such concerns are not misplaced. It is 100 percent true that parochial national leaders often cause international conflict. It is true that insurance companies are often greedy and dishonest and customers are often uninformed. It is true that some parents have little concern for their children. And it is almost tautological that empowering Better People to make the decisions in such situations would result in better decisions being made. Hence the constant calls for another regulation, another law, another layer of oversight.

There is the small matter of whether the Better People will actually be better. I am not talking about particulars here. Of course we can find a narrow-minded blowhard prime minister or president whose country’s best interests would be better served by more oversight from a dispassionate bureaucrat in Brussels. Or pick up any newspaper and you’ll find stories about parents whose children would be better off in care of a social worker. But the law does not work in particulars. Empower Brussels bureaucrats to oversee European affairs, and you are empowering all Brussels bureaucrats, now and in the future. Empower social workers to micromanage families, and all social workers will be micromanaging all families.

Such sweeping oversight might be justified if we could count on the overseers being consistently better at decision-making in their assigned sphere. But the calls for oversight by the Better People rest on a deeper fallacy, one that is very dear to the intellectual class: the theory that the right education and outlook can overcome the universal deficiencies of human nature. This theory, in turn, flows from the idea that there is actually nothing much the matter with human nature in the first place; that we are fundamentally good and our main problem is lack of information or narrowness of perspective. If that is the case, then the right training can make men and women uniformly better, and those who have such training naturally should oversee those without it.

The only problem with this idea is that it is obviously false. It is false in two ways: one moral and one practical.

Practically speaking, even the best education cannot possibly teach the most attentive student what is happening today in any particular place. This is the great downfall of socialism. The finest economic education cannot tell you that Mrs. Smith feels like buying tomatoes rather than spinach at the supermarket today. Multiply that crucial lack of information across a population of millions and you end up with the economic insanity which drove the Soviet Union into the ground, as centrally-organized workers filled warehouses with watches or auto parts while their fellow citizens rioted because they had no food or fuel.

Lack of local information means that EU technocrats cannot possibly anticipate all the side-effects of their tens of thousands of regulations on individual communities from Poland to Portugal. Lack of information means that Obamacare regulators can only paint with broad strokes, leaving dissatisfied customers and impossible rules that are driving insurance companies out of ACA markets across the country. Lack of information means that Child Protective Services will struggle to discern whether a child playing unsupervised in a park is neglected or merely independent. Overseers have to work with averages, but almost no one is exactly average.

And practical problems are actually the lesser of the difficulties that beset hopes for salvation through the efforts of Better People. The greater problem is moral. Most social problems are caused by what is in the heart, not what is missing from the head. Tally up the suffering caused by poor education or limited perspectives and compare it against the suffering caused by laziness and selfishness and petty cruelty and not-so-petty cruelty. It won’t even be close. From the privations of poverty to the devastation of war, by far the largest factor is sin—whether sins of commission or omission, by ourselves or others. But education cannot fix the human heart. In fact, it often merely provides it with new weapons, as the victims of the intellectual murderers of 20th century fascism and communism can testify.

The great insight of the American founders was to recognize that human hearts will always be human hearts, and government must be organized in light of that unfortunate reality. To paraphrase James Madison, there is no way to either find or create angels to govern men. The EU commissioner is made of the same stuff that makes up the prime minister of England; the Obamacare regulator is no less selfish or myopic than the insurance executive. It may be possible to devise systems that restrict or incentivize commissioners and regulators and social workers to make better choices than prime ministers and executives and careless parents, but it is the height of folly to expect them to make better choices simply as a result of who they are; because they are merely human, like the rest of us. Expecting them to be Better People will only lead us to give them more power with less restraint, creating exactly the conditions for them to demonstrate just how fallibly human they actually are.

Header photo by Christopher Michael under CC BY 2.0, cropped